He is a lizard, a Leopard Anole, or Guadeloupan Anole (Anolis Marmoratus).

Initially, Richard Poole was startled to see him. Later (1:3 Predicting Murder), Richard is seen trying out different cat food varieties on him. He then gets a book on lizard care and discovers what sort of food he really likes. By 2:8 A Deadly Party, Poole has named him "Harry", allegedly after Prince Harry, a member of the British Royal Family. Jack Mooney, on the other hand, thinks that he doesn't look like a "Harry".

Harry was taken out of the Inspector house by DI Parker in 9:7 Death in the Salon but DI Parker cant bring himself to put Harry in the wild, unfortunatley he trips and drops Harry and loses him in the trees. By the end Neville, Madeleine, Ruby and JP all search for him and apon luckily finding him discover he's made a friend that goes back to the Inspector house with Harry and Neville.

Camille: Shouldn't your lizard be on the inside? [of the fish tank]
Richard: It's not my lizard.
Camille: Then whose is it?

Richard: Oh, actually I will need someone to look after Harry.
Camille: Harry?
Richard: My lizard. I had to give him a name. I couldn't just keep calling him lizard.
Camille: Only you could call a lizard Harry.
Richard: It was in the paper when I was trying to think of a name. Prince Harry. I think he looks quite like him. He likes fruit, you know. Well, mangoes. And any bugs you can catch. You know, he sort of likes it best if you mash the bugs up in the fruit. No big deal, a couple of times a day. Well, in the morning at eight and again at six.
Camille: Don't worry, I'll take care of your lizard.

Humphrey: There was a lizard in the bathroom.
Camille: Harry. He comes with the house.
Humphrey: Ah! Sitting tenant?

Florence: Morning, Sir. Pleasant evening?
Humphrey: Yes. Yes, it was, actually. Dinner a deux at the shack.
Florence: A deux?
Humphrey: Well, me and Harry, as it goes. But it was good to catch up. It's been a while.

Florence: Oh, there's a pet lizard we should tell you about.
Jack: A lizard?
Dwayne: Harry.
Siobhan: So, how will we recognise him?
Florence, Dwayne, JP (simultaneously): He's green.
Jack: Right, that narrows it down a bit, thank you.

Jack: Siobhan! That lizard's back.
Siobhan: He's called Harry.
Jack: Well, he doesn't look like a Harry.
Siobhan: He probably wants feeding.
Jack: Surely he can do that for himself. Catch things with that ridiculous tongue of his.
Siobhan: Well, JP said he likes mangos and mozzies mashed up.
Jack: Oh, so now we're mashing up mosquitoes for a lizard? Seriously, Siobhan?

Siobhan: You won't forget to feed Harry?
Jack: Who's Harry?
Siobhan: I know you love him really.
Jack: Let's just say we've come to an understanding. I mash up his mango and he doesn't sneak up on me in the shower, when I'm most vulnerable. Besides, the more I look at him, the more he reminds me of your Auntie Bridget.
Siobhan: Thick-skinned?
Jack: No. Beady eyes and bandy legs. And the sneaking up on me in the shower.

Jack: He's definitely a bit green around the gills.
Dwayne: Isn't he supposed to be that colour, being he's a lizard?

Jack: Just can't believe. I mean, he's just a lizard, for Pete's sake.
Florence: Maybe he's more than that. Like it or not, perhaps Harry's become a part of your new life here.
Jack: Maybe.

Jack: Be good to have him back, Florence. It really wasn't the same without him.
Florence: And I'm sure Harry agrees. I'll go get us a couple of beers to celebrate. Give you both a moment.
Jack: You're right. Harry, he is a part of my life. 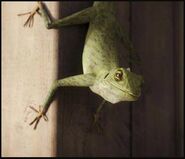 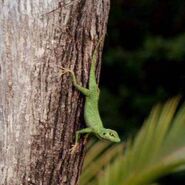 Retrieved from "https://deathinparadise.fandom.com/wiki/Harry?oldid=12891"
Community content is available under CC-BY-SA unless otherwise noted.