Arriving in Paradise[1] is the first episode of Series 1 of Death in Paradise.

“When a British policeman is found murdered in a locked room on the tiny paradise island of Sainte-Marie, Detective Inspector Richard Poole is sent to investigate. He's the perfect man to solve the case. Unfortunately for Richard, he hates sun, sea and sand...”
―BBC

Detective Inspector Richard Poole from the London Metropolitan Police is sent to the beautiful Caribbean island of Saint Marie following the death of Detective Inspector Charlie Hulme in the locked panic room of a resident English aristocrat's house. In the face of the problems of sun, sand and lost luggage, Richard must solve the case. He quickly becomes annoyed by the leisurely pace of island life, as well as the working methods of the local Honoré Police Station personell.

A party is held at the house of James and Sarah Lavender, Lord and Lady Salcombe, when a gunshot is heard. Soon after an alarm starts. The panic room has been locked. The police are called to open the room. Sergeant Lily Thomson enters the room, comes out again and orders butler Lawrence to call an ambulance. When Lily, James and Sarah re-enter the room, they find Detective Inspector Charlie Hulme shot dead.

Detective Inspector Richard Poole is sent to Saint Marie to investigate the crime.

Hulme was investigating James Lavender for people smuggling while carrying on an affair with James' wife, Sarah.

After James Lavender is also killed, Poole discovers the identity of a mystery woman at the Lavender house to be local police officer Detective Sergeant Camille Bordey and with help of his team, Officers Dwayne Myers and Fidel Best, solves the case.

Richard Poole (at the lost luggage desk): What time do you open in the morning?
Daphné: O-sixhundred hours, Sir.
Richard Poole: Then I'll call you at O-six-O-one.

Richard Poole: Is it always this hot?
Lily Thomson: No. Sometimes it's a lot hotter. 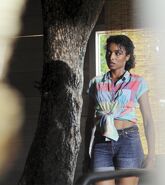 Retrieved from "https://deathinparadise.fandom.com/wiki/Arriving_in_Paradise?oldid=13321"
Community content is available under CC-BY-SA unless otherwise noted.