An Unholy Death is the second episode of Series 2 of Death in Paradise.

“DI Richard Poole is perplexed by a fatal fire at the island convent. Will he and his team manage to unravel the many mysteries at the heart of this seemingly-impossible murder? And will DS Bordey get to the root of the inspector's nun phobia?”
―BBC

What seems a tragic accident when a novice nun is discovered dead in her smoke-filled bedroom, to Detective Inspector Richard Poole seems like murder when he believes the room was locked from the inside by the murderer. Suspects include Father John, the mother superior Sister Anne, other nuns, as well as a mysterious "phantom" nun nobody can identify. The convent has holy springs on the grounds, being promoted by an unscrupulous PR man. Richard's childhood experiences of nuns at his boarding school taint his views.

This article is a stub. You can help Death in Paradise Wiki by expanding it. 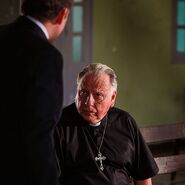 Retrieved from "https://deathinparadise.fandom.com/wiki/An_Unholy_Death?oldid=13424"
Community content is available under CC-BY-SA unless otherwise noted.